we're encountering a communication problem into a BPM scenario.

We're trying to trigger a communication between our BPM and an iFlow developed on Netweaver Developer Studio.

The PI flow is File to SOAP (XI 3.0). We would like to start the BPM flow as soon as a file is delivered from PI.

As you can see in the following screen, the scenario is very simple: 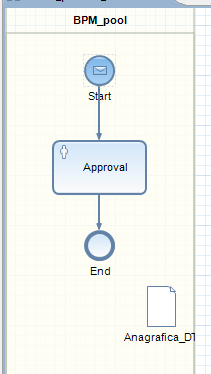 we have associated the inbound Service Interface (related to the target Business Component of the flow) to the trigger of the Start Event, a human interaction with a web dynpro in which we want to show/approve/reject our data, and finally an End Event with no interface associated.

the iFlow is the following:

The Service interfaces (Outbound and Inbound) has the same Message Type associated and are configured as XI 3.0 stateless.

But, once we start the Communication channel sender, we encounter the following error:

We tried to search for some help on the portal but the only suggestion we found has been already implemented.

Thank you very much.