After BO plantform patch update, we are getting a below query script generation issue while refreshing the webi report. But before patch upgrade it was working fine.

We have raised this concern to SAP. As per the SAP workaround, we have re-created the BO report. But still we are facing the same issue.

Any idea why text variable is not supported after patch upgrade. Kindly let me know if you know about this issue & have any work around for this issue. 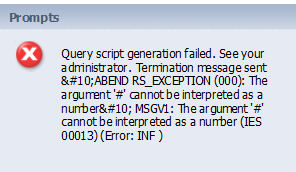