we are working with tables in SAC based on a query from a SAP BW live data connection.

In this table, we have a characteristic with a hierarchy enabled in our rows and some key figures in the columns.

The issue is, that when applying a filter on a hierarchy node, the parent nodes of that element are still being shown all the way up to the root node of the root node of the hierarchy. From my point of view, this behaviour seems faulty from a usability and a value perspective, as it differs from all the others SAP frontends, that I have in mind.

Please see the following example, which represents the filter behaviour in SAC:

This is the unfiltered hierarchy 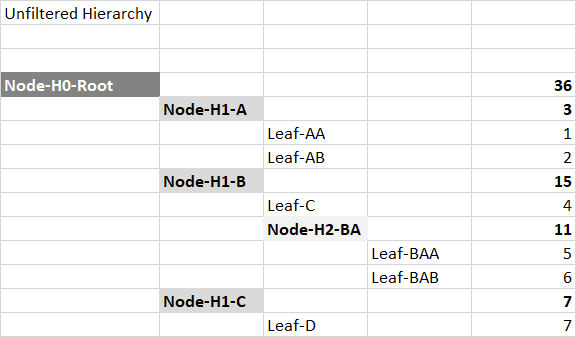 This is the result when filtered on Node-H1-B:

This is the result when filtered on Node-H2-BA:

I would have expected, that only the Node Node-H2-BA and it´s children are shown and NOT the Nodes Node-H1-B and Node-H0-Root as well.


This issue appears in the following scenarios:

Strangely when selecting the node in the crosstag via right click and selecting "filter", the behaviour is just as expected.

Is this a bug on our tenant, are you experiencing a similar behaviour or do you have a workaround?

This behaviour is especially problematic, when having two characteristics in the row drill down, as the elements of the second characteristic are also shown for the parent nodes. This really causes the crosstable to enlarge in an unwanted manner.

Hope to find a solution or opinion for this from anyone of you.