I wanted to see if anyone has noticed or could provide insight into what I believe was a recent reduction to the default route limits for CF Orgs for Pay Per Use accounts.

Here's the situation, our main production org originally used 125 routes and we've never had any trouble adding new ones. We recently tried to add a new route and received an error stating we had exceeded the space route quota. I ran a quick check using the CF CLI and saw that sure enough, our org quota was 100. This struck me as a little strange as we were already 25 routes above that limit. To test whether we actually had an undocumented limit of 125 I removed one route and tried to re-add it. What I found was that I was again unable to add a route, leaving us now with 124 routes. This is when I first started thinking that there had been an undocumented reduction in the limit.

Pursuing this theory further, I tracked down a screenshot I took in February 2020 that seems to indicate a previous route limit of 500: 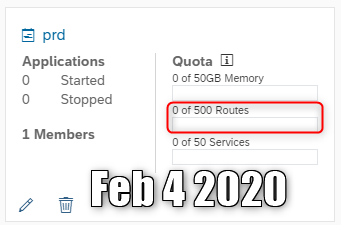 Adding to the problem, the route portion of the space tile was removed at some point between then and now. Here's what it looks like now. 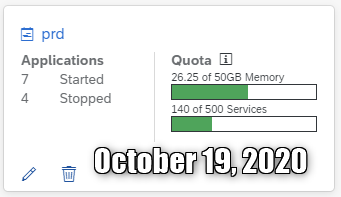 Obviously, the quota information is available elsewhere, but having the route information present on the tile would have made it much more obvious that a change had taken place.

In terms of when I think this change may have occurred, the most recent time we successfully added a route (#125) was on October 6th and we first experienced this problem on October 16th so it must have been somewhere in that date range. I've consulted the change history (What's New in SAP Cloud Platform) and there doesn't seem to be any relevant entry for route limits there.

Support resources for this are fairly sparse, at least from a technical perspective. There are two notes which have some relation to this:

The resolution offered in the second note is to open an incident, which we have done.

Still, I wanted to reach out to the community on this because if the route quota was indeed reduced at the global level (as I believe it was), I think a discussion around this could be useful to others that might experience the same problem. Along similar lines, all previous discussions of this concerned trial accounts where this is concerned with productive, pay per use accounts.

I appreciate any comments!