As I was investigating the effectiveness of tags, which is one of the cornerstones of the new SCN unstructured world, I have observed the following numbers by using the Popular Tags widget on the main space page of the present day SCN (the tag cloud is not planned for the new SCN): 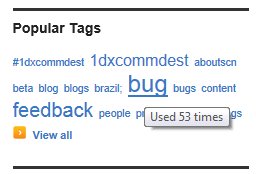 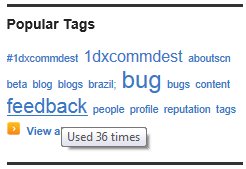 This makes a grand total of 89 reports, but obviously we have far more entries appearing in the Known Bugs List bug and Beta Feedback List feedback documents. While I didn't count the combined entries themselves, it possibly exceeds the number of counted discussions (281) on the space's content tab. This one when saved will make it 282 discussions, and become the 37th feedback tagged discussion.

Soon after the beta was opened, I suggested corrections to the hyperlinks encouraging people to share their bugs and feedback findings. The beta team adjusted the URLs to automatically add the appropriate tag so that people didn't have to remember this. Had this not happened I am somewhat convinced that the numbers shown in the two images above would be much less than we have today.

Once we get over the next few waves of bug correction and finishing what is in the backlog for the new SCN, I am proposing that we use the new SCN for the next Beta cycle of reporting bugs and feedback. It will serve as a fantastic use case, and one that likely would not have been overly effective in the earlier stages of the current beta. All of our blogs, answers, activity feed, DM's, etc. will be around improving the site, using the site, and in essence validating not just features and bugs, but viability of the new SCN for moving forward in capability and a better user experience.

If there is another test round of migrating content from current SCN to beta SCN, then the known issues lists (which are both DOC-xxxx formats) would like get moved to the Archive location, but that is something being looked into at the moment...