I have an issue figuring out how to make a multilevel deep insert to work out.

So far the issue I'm having is how to make a working types for it to work, the scenario is as follows.

We have our main entity, which is Insurance, insurances has header data, such as an ID and a few more fields.

Insurance has defined three navigation properties/associations with another three entities, that works correctly.

One of those entities is a beneficiary, for an insurance there can be n number of given beneficiaries.

Issue comes when trying to fetch/fill the associated entities. The types we use in ABAP is something like this:

When I do the query request to the set using an expand command, only the main info is being taken in consideration, so only insuranceModalitySet and InsutancePaymentSet is taken into consideration, however insuranceBeneficiaryset is getting ignored, as well as ImageSet and electronicSignature in the response, just like this:

We're using an expand_entityset to perform this test.

I've also checked, the expand properties are being called correctly, and the names for the types are set correctly.

I'm also facing the issue trying to call the two entities in the beneficiarySet in the URL:

If the URI is like this: InsuranceModalitySet,InsurancePaymentSet,InsuranceBeneficiarySet/ImageSet it "works".

If however, in the URI i try to expand the electronic signature set and the image set, it gives me this error: 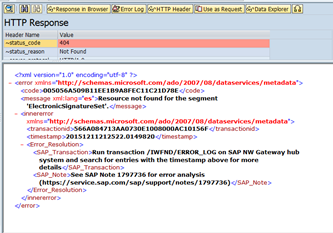 Perhaps I'm not calling the URI correctly or something else.

If any of you guys could give me any idea of what's the error it would be highly appreciated, in the mean time I'll still run some tests and figure out what's wrong.