Strange issue - R3load/MIGMON export completed successfully (no err or xeq states left in TSK files and export state file confirms AOK)
However upon starting import to target realised that TOC files (about 75% of them) do not contain the tables for that package (though they are all listed in the STR files).

I think this is likely either a bug in the R3load program or a corruption due to writing to NFS.

Has anyone seen similar?

"empty" TOC files look like this instead of having loads of tables listed: 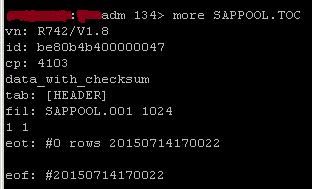 Also notes on format issues with TOC files - but again doesn't apply as in those notes the TOC still contains all the tables.