Women in computing... are we such a rarity? How many do you know?

- It is so weird... I´ve just realized that I´m having lunch with three programmer girls. Programmer girls. You all progammers. Who would have thought of it? This is so out of this world!

We started at each other in awe.

- What? Do you think we are strange? Why? We are as normal as any of our female colleagues.

Then he proceeded to explain that, when he studied computer science in another country, Mexico, he had never met any female student enrolled in a computers related carreer. Thus programmer girls were a rarity for him.

A rarity. At least where he studied and many other countries. But I dare to say that in our country it is quite normal.

Women can aspire to computers-related careers just like women who aspire to become doctors or teachers.

When I was in high school I had a lot of girl friends who dreamt about studying a computer engineering career at Technological University of Panama (UTP). Studying there sounded so prestigious - (And in fact it is) - that it doesn´t surprise me that they liked to play with the idea, even if not all of them liked math a lot.

When studying at UTP I could dare to say that at least 33% in the pre-graduated classroom were females. And all of them seemed very enthusiastic about this career. I found a chart on internet showing the percentage of women studying computing back in 2000, but I don't remember where I left it. It was near that number. It kinda had decreased a little bit some years later. (I promise I´ll post that graph when I find it, to make it more accurate )

Now, I found another about the percentage of women enrolled in post-graduate studies and they represent more tha 40%. So I guess those are good news! 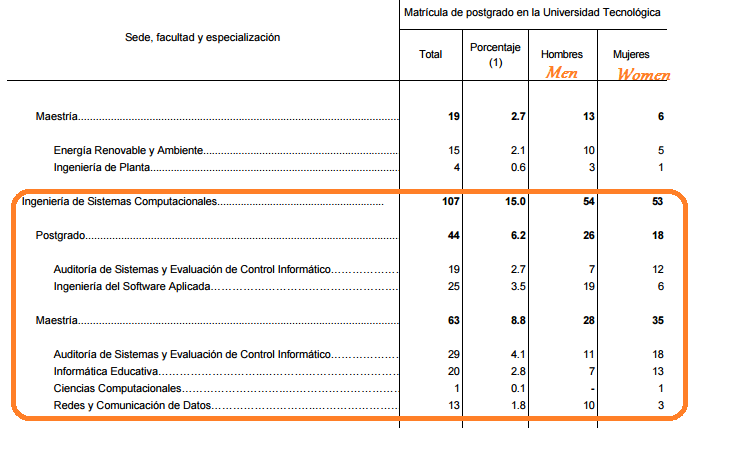 However, after reading some articles on the internet, it seems that we might be unique compared to other countries... like USA? (see When Women Stopped Coding : Planet Money : NPR)

Do my country have the secret to make computer science appealing to girls? Do statistics in USA only include women doing low level code stuff like what you do with C, C++, Java not taking in consideration more girl-friendly programming like Visual Basic, .net, Powerbuilder, etc.? Well... I don't know.

But what I know is that during the time I´ve been working in this field I have met a lot of talented female colleagues, not only graduates from UTP, but also from National University of Panama and Latina University. Some of them are programmers, some of them are database analysts, some of them are more into technical support area and they all have in common one thing: they love what they do.

What about your country? Are women in computing a rarity? Can you mention the ones you have worked with?