We are facing an issue with Currency conversion while implementing Consolidation for one of our clients. The requirement is to perform conversion using different exchange rates per account for an entity.

For example, considering the entity structure given below: 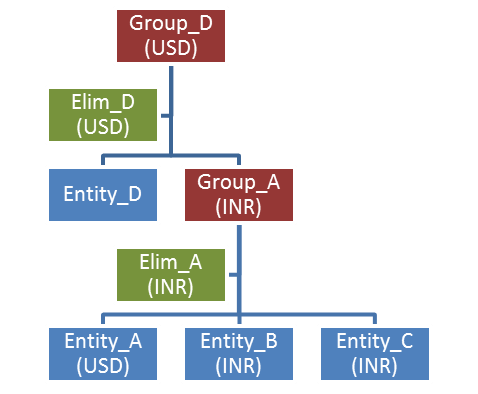 Now, let’s consider the entries for elimination of Reserves in acquiring entity with Investment in acquired entity. While performing consolidation at Group_D in the month of June 2014, the LC (INR) data in these accounts for entity Elim_A is required to be converted to USD using more than one rate, each corresponding to the acquisition of Entity_B & Entity_C by Entity_A. For Entity_A & Entity_B conversion would happen at the rate of 45 but that for

Hence, summarizing the issue, for the same account within an entity, different exchange rates need to be stored for performing conversion from LC to Group Currency.

As far as we know, in BPC we can store single exchange rate at entity – account combination. For a legal entity, each account can have one exchange rate for every currency. I am not sure on how to implement this requirement of storing multiple exchange rates for one single account of an entity.

We would really appreciate your inputs/help on the same.