Hey folks, I just installed the PB15 Beta and have had a slightly different experience.

Initially I chose to install the PB.Net prerequisites but the installer asked me if I wished to re-install them. Since I already had the stuff installed, I chose no and moved on to the main installation.

I received the same message about a previous version of Infomaker as others have. I chose to continue with the install and it went on fine.I did not have the issue with the installation folders for PB 15. Mine were placed as I expected them to be. 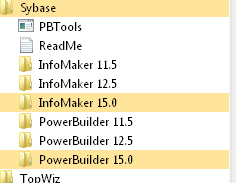 No other issues were encountered.